The charter of the “German Lutheran Society in the City of Boston” was granted by the Commonwealth of Massachusetts on February 18, 1839. Now called First Lutheran Church of Boston, we are the oldest Lutheran church in New England. FLC‘s first century was a time of significant growth and change. On Christmas Day 1847, “The First Evangelical Lutheran Church of Zion” dedicated a red brick house of worship in Boston’s South End (still standing today). The congregation grew, started a day school, and founded mission congregations in Massachusetts, Rhode Island, and Connecticut. In 1899, a new church building in the South End was completed, and silver vessels for the Lord’s Supper (still in use today) were donated. During the early 1900’s, the constitution was changed to permit the use of the English language during worship “occasionally.” In 1930, one of FLC‘s native sons, Dr. Walter A. Maier, a professor at Concordia Seminary, St. Louis, first broadcast what would become the longest-running Christian radio program in history, today broadcast weekly in over 30 countries: “The Lutheran Hour.”

In 1954 the congregation purchased a vacant lot at the corner of Berkeley and Marlborough Streets from Massachusetts General Hospital for $55,000.00. A young architect in the congregation, George Livingstone, chaired the building committee and hired Pietro Belluschi, Dean of the MIT School of Architecture and Planning, to serve as the building designer. Our present building was dedicated September 15, 1957 and is regarded as a significant entry in the history of modern sacred architecture. 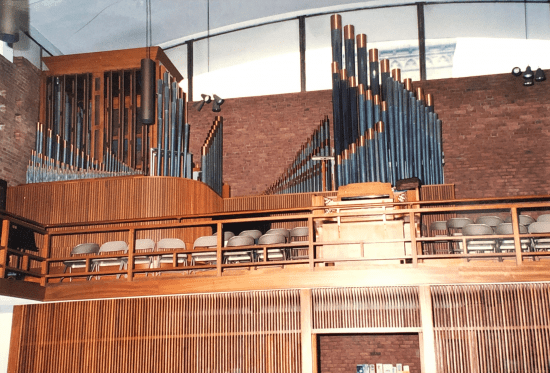 In the late 1990s, the congregation decided to replace its aging pipe organ built by Wicks (pictured). The Richards, Fowkes & Co. Opus 10, a mechanical-action instrument in the 18th-century North German Baroque tradition, was dedicated to the glory of God in 2000. This superb instrument draws artists of international standing and organ aficionados from around the world. It is the only organ in Boston with an historically accurate sound for the works of J.S. Bach and other organ masterworks of the Baroque and earlier periods.

Throughout our congregation’s history we have been blessed with dedicated pastors. Two of our pastors served for thirty years or more: the Reverend Paul Brauer served our congregation from 1931–1968, and the Reverend Walter Reuning served from 1967. When Pastor Reuning retired in 1997 and became our first Pastor Emeritus, the Reverend Ingo Dutzmann was installed as Pastor. Upon his retirement in 2019, the Reverend James Hopkins became FLC’s pastor. From 2003–2008, Associate Pastor Augusto Riss focused on the Brazilian ministry, and he was succeeded in 2011 by Pastor Paul Lantz, who took a call to the Lutheran Church of the Cross in Hanover, MA in 2014.

In 2007, The First Lutheran Church of Boston celebrated 50 years in Boston’s Back Bay. With the Spirit’s guidance we wish to increase our overall presence in the city as an open, welcoming congregation that is also biblically grounded and confessionally Lutheran.

We invite your prayers and welcome your support as we look ahead to the next half-century: lifting high the cross of Christ, to His glory!