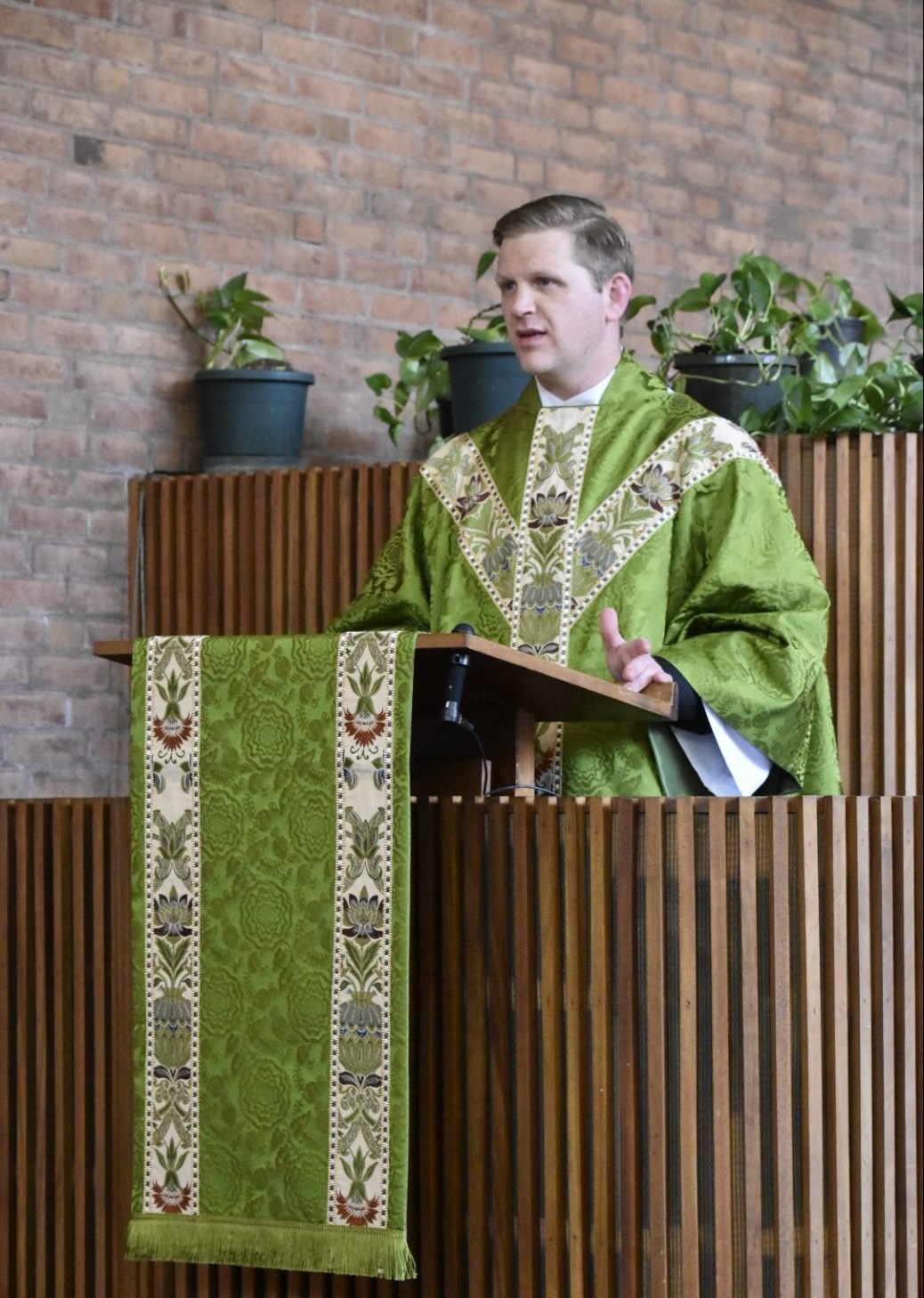 Pastor James Hopkins preached this sermon on the twentieth Sunday after Trinity 10/17/2021. The service was broadcast live on Facebook at 11:00am, and is now available on the FLC youtube channel. To follow along from home, the bulletin is available as a PDF: Trinity20 Bulletin

The text for the sermon was the day’s gospel lesson. To read the Bible texts for the Twentieth Sunday after Trinity, click here.

In His Word, God calls us to a position of weakness and vulnerability, of faith in things that we cannot see or control. What we can see – a man hanging on a cross, His followers persecuted and martyred, poverty and hunger – what we can see, we do not like. There are a million reasons for rejecting the Gospel; and so, it should be no surprise that it is rejected so often.

Among the uncomfortable realities God’s Word exposes is this: that Jesus is not a universalist. In perfect love, by His perfect life, His suffering and His death, He has reconciled all the world, the cosmos, the universe to His Father. He has made atonement for the sins of the whole world, even for those who will reject it and not benefit from it eternally.

Jesus does not force His forgiveness on anyone. Most of the Jews at the time of Christ rejected Him. For one lame reason or another, they couldn’t be bothered. They had to go off to their fields or their businesses. Or else it was worse.

The invitation insulted them. They thought: “Who is God to invite us as though we were beggars in need of charity?” They killed the servants for even asking them to come.

They, in turn, were killed. Their cities were destroyed. This was fulfilled, partially, in the destruction of Jerusalem in 70 AD. But this wasn’t a wrath reserved for them alone. So also was Persia destroyed, Rome, Alexandria, the Aztec empire, and all the ancient kingdoms. So will all the nations, kingdoms, and power bases of men be destroyed. Because the world is evil. This parable is a warning.

It’s not a mission appeal hoping to guilt you into working harder to win the lost. God doesn’t need you for this. It is His Kingdom. He’ll take care of it. You can’t convince the devil to believe.

Pause… I’m sure I know what many of you are thinking. God works through means. God even commands for His Word to be spread and to make disciples of all nations. Good. Amen. Let it be so.

It is not your fault that most people reject the Gospel, and it should not surprise you that they do. For while everyone has been reconciled to the Father in the death of the Son, not everyone wants it. Most refuse it. This parable is not for them. It is for you. You need to be warned that not everyone in the world goes to heaven, and you can’t fix that.

You also need to be warned that not everyone who goes to Church goes to heaven either. Some seem to come in, but they don’t. They are like Simon Magus. They want the power of Christianity, but not the cross. Or they are like Herod, wishing to see some miracle, curious but distant. Or they are like Nicodemus before his conversion, coming by night, speaking out of both sides of their mouths, calling Jesus  teacher on the one hand while insisting on their own way and understanding on the other. Whatever they are: they aren’t Christians.
They come to the hall but they will not be clothed by Christ. They lack the wedding garment and stand instead in their own garments.

It is possible to come to church and yet be a self-righteous, self-satisfied hypocrite. You can fool all the world, but you can’t fool God. The only way you come into the Kingdom is if you shirk your own righteousness and are clothed with His righteousness. This banquet is only for beggars who need a garment that was not their own. This is great news if you know you’re a beggar, but terrible news if you’re not.

Jesus says to you: “Take your clothes off. Go in there and get sprayed down. You can’t bring that filth in here. It is infected, no good.”

That is not good news if you think you’re just fine and have some other means to eat. But if you’re lousy, homeless, dirty, and hungry, it is great news. And the surprise is that the initial humiliation is fleeting. The cleansing is mostly painless. What seemed stern was actually a loving invitation.

We find ourselves not in the hands of a prison guard but a gentle and respectful King, who clothes us with His own garments, who calls us and makes us lovely. He, who gave His life for us, gives us a place to live, a family of trusted helpers, a banquet of finest foods, and freedom.

This parable is a call to repentance and it is a promise of God’s steadfast mercy. The servants gathered everyone they found. They made no distinction. This is good news for sinners and those who can’t help themselves. It doesn’t matter how lousy you are, how infected, how contagious. They are all gathered in, good and bad, clean and dirty, smart and stupid, industrious and lazy. And everyone is clothed with the same gentle hands, and everyone eats of the same single Bread of Christ’s Body, and everyone is proclaimed to be the very  immaculate, stunning, and lovely Bride of Christ Himself: cleansed by Christ, fed by Christ, clothed by Christ, loved by Christ.

This is the essence of our religion. God does all the work. He provides all the grace. You haven’t been good enough. You don’t deserve to be in His presence, to eat the Body and Blood of the risen Christ, to call Him Husband and to call His Father Our Father, but He wants all that for you, has paid for all of it that you might have it.

We seized and killed not just the messengers but also the very Son of God. Yet God welcomes us in as replacement sons. We get for free what we tried to steal. We neglected or confused His doctrine and made up excuses, but He remains steadfast in His mercy. He gives us His Word. He speaks kindly to us and restores us with His absolution. In Word and Sacrament, He speaks us cleans, declares us righteous. He gives us good works to perform not as punishment but because we are part of the family. He gives us a part of His Kingdom.

“Vengeance is mine,” saith the Lord, “I am the burner of cities, the destroyer of Sodom and Jerusalem. I cast into darkness the one who refuses my garments who has neither faith nor good works. Yet I choose to be merciful, to pardon, to reconcile. I declared war. Yet now, in My Son, at the proclamation of angels, I declare peace. I choose, from my sovereignty, to be generous and merciful, to raise the dead, to fill the banquet hall and the hearts of repentant sinners with joy. I say to him who has no money, ‘Come, buy and eat without money and without price.’”

The Kingdom of God is like a King who is unlike the kings of the earth. We live in this kingdom not by the lucky circumstances of birth or acts of violence but by grace in faith.

But what if you are worried that your faith is insincere, that you are here without the wedding garment, that you are secretly a hypocrite and liar?

Repent and stop looking at your faith. Look to Jesus and to His Word instead. We should trust the promises of God and look to the objective reality of what He has done and said rather than into our hearts or at our works.

The question isn’t “Do I believe in Jesus in enough?” If it was, we’d be doomed. We haven’t believed enough. The question is “Did Jesus die for the whole world and am I part of the world?” Yes. He did and I am. There is my hope and comfort – not in my faith which is often mewling and weak and waning, but in God’s grace and promise – what He gives to faith. I am Baptized. He put His Name on me. I am not worthy of it. I don’t live up to it. I sometimes try to forget it or doubt it. I have often betrayed it. Nonetheless, this is a historic fact. It happened. I am Baptized and I didn’t do it myself. He did it.

And when He did it He made a claim on me and for me that won’t let go.

Jesus did not die in vain and is not now dead. He died for me and He rose for my justification. I am not worthy, but I didn’t invite myself. He invited me. He said, “Friend, come up higher.”

My heart is fickle. My reason and my conscience can lie and deceive, but His Word does not lie. He is the One who sent servants out to gather up the good and the bad from all the corners of the earth. The question isn’t whether I am good or bad. The question is “Did He send them or not? Did He include even me? Was He sincere in this effort or not? Is the invitation valid or not?” The answer to all those questions is a resounding YES because God’s Word is trustworthy and sure.

Seek the Lord while He may be found. Call upon Him while He is near. Let the wicked forsake his ways and the unrighteous man his thoughts. Let him return to the Lord that He may have compassion on him, and to our God, for He will abundantly pardon.

Pastor Hopkins would like to extend special thanks to Rev. David Petersen for inspiration. 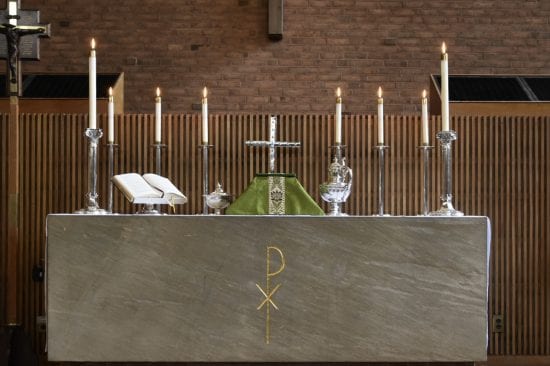