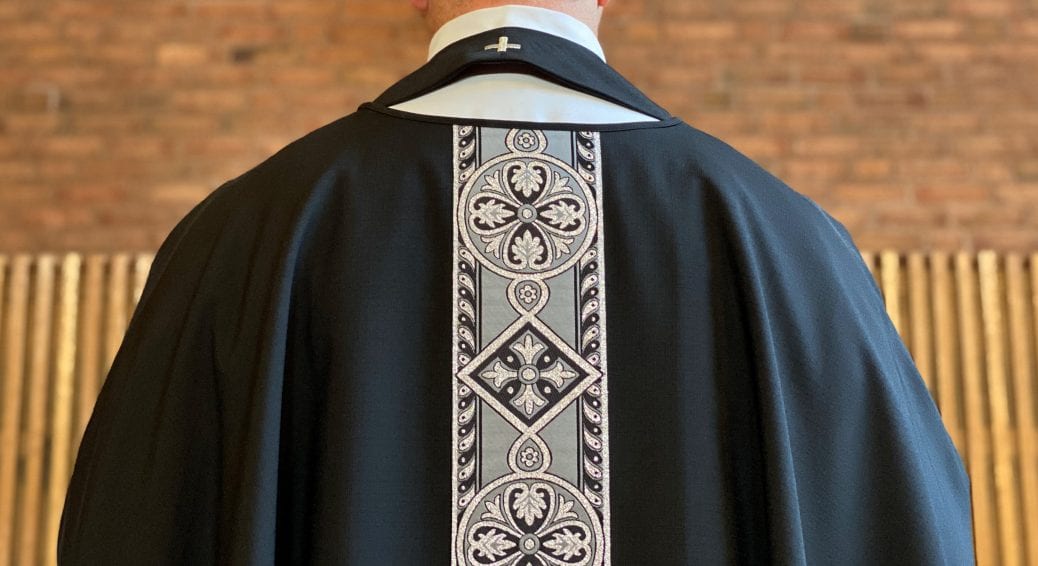 Pastor James Hopkins preached this sermon at the Tenebrae service on Good Friday 4/2/2021. The service was broadcast live on Facebook at 7pm, and is now available on the FLC youtube channel. To follow along from home, the bulletin is available as a PDF: Tenebrae Bulletin

The text for the sermon was the day’s gospel lesson. To read the Bible texts for Good Friday, click here.

In the beginning, God created the heavens and the earth (Genesis 1:1) – perfect heavens and perfect earth. It was peace and joy, order and light. And so on a beautiful spring day in the Garden, Adam and Eve, faithful husband and beloved wife, wandered shamelessly through the home prepared for them. There was joy in the air that day; the joy of newlyweds loving one another and loving their Creator.

Along came the serpent, craftier than any other creature. He came with the irresistible fruit; the fruit that would make you a god, or so his story went. Eve ate and Adam did, too. Both were guilty. Both were cast out. Both would die outside of Eden, away from their perfect home. Something, everything, had gone terribly wrong.

The truth that things in our world are less than they should be is no mystery, and you would have a hard time finding someone who, with a straight face, could say otherwise. The world is not, and we are not, what we know was meant to be. Such truth is beyond dispute. It weighs down with self-evident force upon every heart that has not lost the sense that makes us human.

Sin began there in the garden, but sin did not end there in the garden. From that moment in time, from that singular sin, the fruit of the forbidden tree, peace became war, joy became tears, order reverted to chaos, and the light faded into darkness.

God created one world; and in his rebellion, mankind has created quite another: concentration camps and murdered children; friends betrayed and lies excused; self-interest and pride; apathy and laziness. We are complicit in what has gone wrong, and we have a problem with that.

World-class criminals, murderers and drug traffickers, if they know what they have done, may have no trouble with that; but many of us find it a bit too much.

“Surely,” we say, “we have not done anything that bad, bad enough to call for the death of God on a cross.” Everyone has an excuse. And all our excuses are lies.

The guards at the death camps, the cheating spouses, the executive padding expense accounts, the physician giving a lethal dose of morphine – all have excuses.

“I was obeying orders”

“I have uncontrollable needs that must be satisfied”

“Suffering must be stopped at all costs.”

Name the crime and there is a ready excuse.

“My parents weren’t nice to me”

And we are right back to “Adam, where are you?” and his pathetic response, shifting the blame:

The woman whom You gave to be with me, she gave me the fruit and I ate. Genesis 3:13

Not only does He place the blame on the woman for whom he was responsible, but he even blames God for giving her to him. God came looking for Adam in the Garden, because sin really does matter.

Sin matters because you matter. If sin were of no significance, it would only be because you are of no significance. If sin meant nothing, it would only be because your brokenness is not worth fixing. You hurt someone you love and maybe he or she says something like, “Forget it. It’s nothing. It doesn’t matter.” But you know and we know that it is not “nothing.” It does matter and we will not forget it.

That sort of a disregard for wrongs done, that sort of apathy is not forgiveness. In Holy Absolution, God does not say, “It’s okay. It was no big deal. You’re only human.” He says, “I forgive you all your sins.” Real love does not say to the beloved that sin does not matter, because the beloved matters. Jesus spares us from the sentimental love that says what we do and who we are don’t matter. The cross is proof of that.

Nevertheless, we would rather not matter if mattering means being judged by God. Better to declare that this is simply the way the world is. Better to justify our ways to God. Better to put Him on trial instead of us. And so we have put God in the dock.

From every corner of the earth, from every scene of every crime, from north and south, east and west, from the rich and the poor, every mother’s son and every father’s daughter gathered for the trial. The jury deliberated and reached its verdict. The decision was unanimous. With one voice, poor deluded humanity pointed to the Prisoner and declared, “God is guilty! Crucify Him!”

Even the angels were shocked, the stars hid their light, the universe went silent at the audacity of it, the wrongness of it, the outrageousness of it. The Judge of the guilty is Himself judged guilty?!

Finally, amidst all the ridiculous rebellion, a lie so bold it will certainly be exposed! But no – the Prisoner calmly responds,

It was a beautiful spring day in Jerusalem as Jesus Christ, Husband to His bride, the Church, was paraded shamefully through the streets, out to the place He would breathe His last breath – a rotten tree between two criminals.

What was separated by sin has been reconciled by the deed of perfect love. What the first Adam destroyed, the Second Adam has restored.

But tonight, the cross brings us to our senses. Tonight, our eyes are fixed on the dying Derelict who is the Lord of Life. We look upon the One who is everything we are and everything we are not, the One who is true Man and true God. Here, through the cross, we have come home; home to the truth about ourselves; home to the truth about what God has done about what we have done. Here we know, or begin to know, why this awful, awe-filled Friday is good.

There was certainly darkness that night outside of Eden as Adam and his bride remembered all they had lost and all they had done. And there is certainly darkness this night at Calvary, as we, like our first parents, remember how we arrived here. Jesus Christ, dead on the cross, seems far away from how we imagine things are supposed to be; but, thanks be to God, this is how things are.

As soon as the spear pierced Him, blood and water rushed forth from His side. (St. John 19.34) Blood and water did not come trickling out like a leaky faucet. Grace came bursting forth from the side of Christ as a cleansing flood. Nails and spear go in, Baptism and Eucharist come rushing out. Grace was there, waiting to cover all mankind.

That same water has washed you. In your Baptism, the Crucified One has joined Himself to you. In His most Holy Supper, the Lamb of God has fed you His own Flesh. By Christ’s Body, broken in death, you are restored to life. In His precious Sacraments Jesus personally delivers to you the fruit of the cross, the antidote for the fruit of the tree, because He will not permit sin and death to have the last word. Every good thing that comes from Jesus has touched you, and there is no greater Grace than that.

Our hearts may be breaking this evening, and they should. But we should not grieve as others do who have no hope. Tomorrow night is the Great Vigil of Easter. In His final word from the cross, Jesus said, “It is finished.” But it is not over.