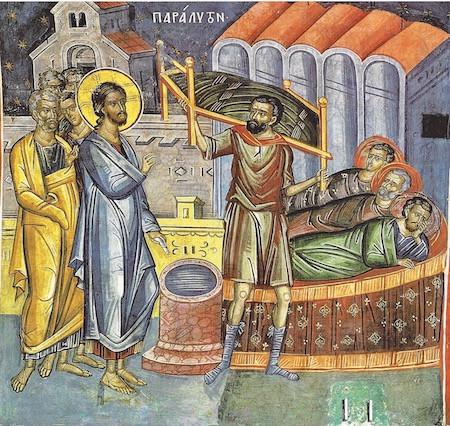 A group of men take their paralyzed friend to Jesus, the miracle worker. When He sees their faith, He says to the paralytic: “Take heart, your sins are forgiven.”

That sounds good, and it is. But if you really think about it for a moment, and don’t just skip to the end of the story, you see that, most likely, in the moment, this was hugely disappointing.

Folks in general are not much concerned about the forgiveness of sins; or if they are it is rather high on Maslow’s pyramid. That is, it’s something to be sought only when all other needs and desires are met.

If I am in good health and have a nice car, if I am popular and successful and well-liked, then I can concern myself with the metaphysical, philosophical, and spiritual matters. But until then, everything else is ahead in line.

The long-term effects of such an attitude are disastrous. It’s not just that it leads away from Christ, as if that weren’t enough, but it’s not even useful in the short term. It misses what truly ails us.

What human beings crave, whether they know it or not, is the presence and acceptance of God. Our sin has deformed us so that we know something is missing, but without God’s Word we don’t know what that is. Apart from Him, we’ll try to fill up on nearly everything imaginable: material things, or honor among men, or constant amusement and physical pleasure.

Augustine famously described this reality in the opening of his confessions. There he prays: “You have made us for yourself, O Lord, and our heart is restless until it rests in you.” He got that exactly right.

The image of God lost by fallen humanity is a haunting longing. And nothing but God Himself can satisfy it.

The image that was lost is restored when God declares a man or woman righteous by faith for Christ’s sake, that is, when God pronounces him or her forgiven. Apart from that there is no rest, even if there is physical health and earthly success.

The friends of the paralytic didn’t bring him to Jesus for that, for the forgiveness of sins. They brought him for a healing. But Jesus saw the greater need, even as he saw their faith. Therefore, He gave the man what he needed most. Jesus said: “Take heart,” literally, be courageous, “My son, your sins are forgiven.”

All this to say that we cannot value the forgiveness of sins too highly. It is the heart of our relationship with God in Christ. And it is the focus of the Scriptures, something that temporary healing merely complements. Consider how the Psalmist praises God for forgiveness in Psalm 103:

Bless the Lord, O my soul, and forget not all his benefits, [He] forgives all your iniquity,

[He] heals all your diseases, [He] redeems your life from the pit,

[He] crowns you with steadfast love and mercy,

[He] satisfies you with good so that your youth is renewed like the eagle’s. Psalm 103:2-5

The Messiah, our God, who takes up our flesh, says of Himself in Isaiah:

I, I am he who blots out your transgressions for my own sake,

and I will not remember your sins. Isaiah 43:25

No one ever imagined such a God, nor would they. People imagine gods like themselves, who do as they would do. But there are no mythologies in the ancient world of a god who takes up human flesh in order to be abused and killed for a people who hate Him. When ancient mythologies speak of gods taking up flesh it is always to ravish a maiden or to engage in the bloodlust and sport of war. But our God is not like us. He is compassionate and forgiving. Of this incomprehensible goodness, Micah writes:

Who is a God like you, pardoning iniquity and passing over transgression for the remnant of his

inheritance? He does not retain his anger forever, because he delights in steadfast love.

He will again have compassion on us; he will tread our iniquities underfoot.

For all that it should be no surprise that the Christ is announced to the world by John this way:

Behold, the Lamb of God, who takes away the sin of the world! John 1:29

In this proclamation, John seems to be blending two Old Testament types: the Passover Lamb and the Scapegoat. The Christ is the fulfillment of all the ceremonies and sacrifices of the Old Testament which forgave the sins of the repentant who looked in faith to Him. Thus, Paul confesses in Ephesians:

In [Christ] we have redemption through his blood, the forgiveness of our trespasses, according to the riches of his grace, which he lavished upon us, in all wisdom and insight. Ephesians 1:7-8

And again, in Colossians 2, Paul turns to us and says:

You, who were dead in your trespasses and the uncircumcision of your flesh, God made alive together with [Christ], having forgiven us all our trespasses, by canceling the record of debt that stood against us with its legal demands. This he set aside, nailing it to the cross. Colossians 2:13-14

No one wants to live with paralysis or in mourning or with overwhelming pain. And none of us will forever. But we do suffer many infirmities now, insofar as God in His wisdom has seen that it will be good for us and good for the world.

Though the paralytic’s friends thought they were doing him a favor, it turns out that this man’s sufferings brought his friends to Jesus’ feet, and that the Word proclaimed to them brought them there in faith.

In the meantime, He says to you “Take heart, my son. Your sins are forgiven.” Or to put it another way He says:

“Drink of it all of you.

This Cup is the New Testament in My Blood which is shed for you for the forgiveness of sins.

This do as often as you drink it in remembrance of Me.”

This is the forgiveness in which the paralytic rejoices. This is what he will treasure for eternity. This is the glory of God, on which he will meditate; which you can discuss together, risen and walking in your true home.