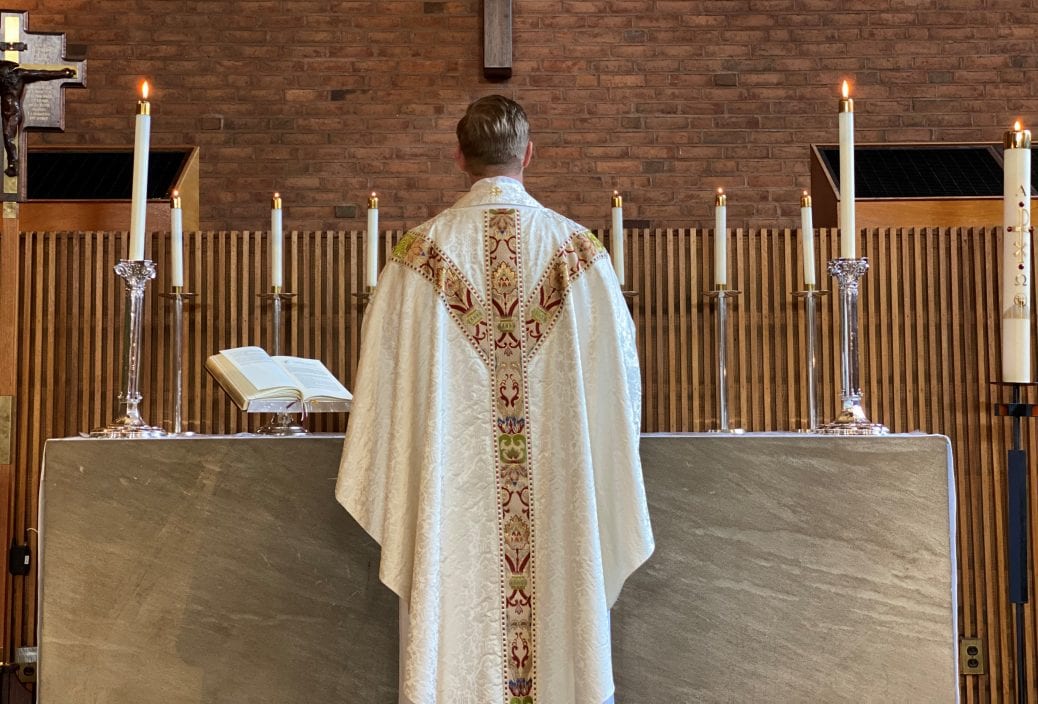 Pastor James Hopkins preached this sermon on the sixth Sunday of Easter 5/9/2021. The service was broadcast live on Facebook at 11am, and is now available on the FLC youtube channel. To follow along from home, the bulletin is available as a PDF: Easter6 Bulletin

The people of Israel wailed and mourned in pain and great distress, as the bronze serpent was brought before their eyes. They looked at it with longing and yearning, with tears streaming down their faces. The hammer was raised into the air and fell with a thunderous crash again and again and again. They cringed with every blow as the bronze serpent was broken into pieces before their eyes.

It had been about 700 years since that same bronze serpent was first raised up in the wilderness. You heard how it happened just now: it began as the people of Israel cried out in impatience and anger against Moses and against God. Then they cried out in agony when God sent the fiery serpents among them. Finally, they cried out in repentance as they asked Moses to pray to the LORD on their behalf, that He would take away the snakes and heal them.

So Moses did as the people asked, and God did as Moses asked. He told Moses to make a bronze serpent and put it on a pole, which would have been shaped something like a cross, and whoever looked at that bronze serpent would live.

It wasn’t magic. Neither was it an exchange. People who looked at the serpent looked because that’s what God told them to do. They looked upon the bronze serpent because they had faith in God’s promise. And then they didn’t.

Seven hundred years later, many were still looking at the serpent. They called it Nehushtan. They made offerings to it, burned incense to it, and worshiped it. They looked at the bronze serpent with faith in the bronze serpent, and not in the LORD.

So King Hezekiah, the pious son of the wicked King Ahaz, destroyed it. He removed all the high places and broke the pillars and cut down the Asherah. All the idols that came from the surrounding nations were destroyed. Until the only idol that remained was the one they made from their misplaced faith. You can read about this in 2 Kings 18.

It would be a simple enough matter, except for one thing: God commanded this bronze serpent to be made in the first place. But He commanded it to be made for a purpose. The snake on the cross was a cure for the snakes on the ground.

They took a good thing from God, and they twisted it, warped it, and transformed it. They put their faith in it, and that is what makes an idol. That is why the serpent had to be broken.

What happened to the people of Israel happened years later to the disciples. Jesus warned them that the hour was coming, and indeed had come, when they would be scattered, each to his own home, and would leave Him alone.

Jesus speaks these words just before His betrayal and arrest in Gethsemane. There, the disciples who’d imagined Jesus as an earthly King, scattered – each to his own home. They had trusted in Jesus for all the wrong things, and so, their hopes were dashed to pieces like so many idols.

What’s most difficult is that when Jesus tells them that it’s going to happen, He adds this:

I have said these things to you, that in Me you may have peace. In the world you will have tribulation. But take heart; I have overcome the world. verse 33

Like the people of Israel before them, they were impatient and unfaithful. And God provided for them. Once again, once and for all, the Snake on the cross was the cure for the snakes on the ground.

As that bronze serpent was made to be like the poisonous ones among the people, Christ made Himself to be like you. He took on your flesh, and more:

For our sake He made Him to be sin who knew no sin, so that in Him we might become the righteousness of God. 2 Corinthians 5:21

He also was broken before our eyes; not as an idol, for He is the One before Whom all idols fall down broken. He was broken on account of our idols.

When you listen to a word that twists and tears at God’s own Word; when you make idols of the good things God has given you: intellect, skill, health, and fortune; when you try to hold Jesus to promises He never made, raging at Him when He does not deliver what you think He should. And you scatter in fear, each to his own home, leaving your Jesus alone…

You don’t pray to a Bronze Serpent or a dead Jesus. Your Lord is alive, and bids you to pray. And pray, you must. You still have tribulation in the world even as you have peace in Christ.

Jesus was at peace, trusting in the goodness of His Father’s will, waiting for the revelation and vindication of the resurrection. Christ, our Lord, had tribulations in this world and He prayed. So do you.

The day will come, however, when you will ask Him for nothing and will be vindicated, even as the Christ has been vindicated in the Resurrection. In the meantime, Christ has said this that you would have peace. This is the purpose of His speaking to us, giving us His Word, revealing Himself to us, not only this section of the Gospel but in all of Holy Scripture.

He tells us the truth so that we would have peace in the world, even though we do not have peace with the world. They hate and mock your prayers and faith, but you belong to God.

You have His Name. He gives peace that the world cannot give. This peace comes from the Father for the sake of Christ. It is the peace that was announced by angels to shepherds and then bestowed in the Upper Room. It is peace with God, full joy.

You are reconciled to the Father in the Blood of Christ. He loves you and you belong to Him and He to you. This world, its sickness and death, its pain and sorrow, its lies and betrayals, along with its constant lack and many evils, is passing away.

Thus, Christ says: Take heart. I have overcome the world. I have bought your peace, won your joy, named you as My own. The hour will come when you will not be scattered and separated and alone. The hour will come when you will have no needs or lack. You will be gathered to My Father’s bosom, and then you shall ask Me for nothing, but forevermore will sing with Me My Father’s praise.