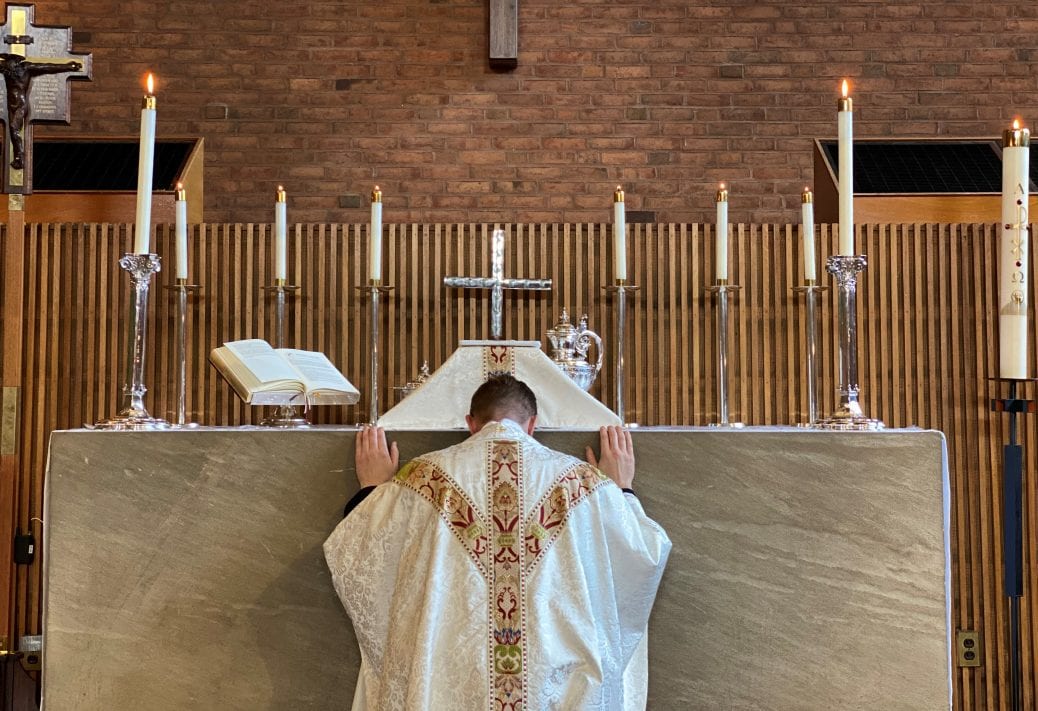 Pastor James Hopkins preached this sermon on Easter Sunday 4/4/2021. The service was broadcast live on Facebook at 11am, and is now available on the FLC youtube channel. To follow along from home, the bulletin is available as a PDF: Easter Bulletin

The text for the sermon was the day’s gospel lesson. To read the Bible texts for the Resurrection of Our Lord, click here.

He is risen indeed! Alleluia!

He is risen indeed! The stone is rolled back! The grave clothes are neatly folded! The tomb is empty! Jesus is alive, risen, triumphant, and glorious! He is even speaking to Mary Magdalene one-on-one!

Supposing him to be the gardener, she said to him, “Sir, if you have carried him away, tell me where you have laid him, and I will take him away.” verse 15

It is the irony of ironies. She is weeping for a dead Jesus, even as she is face-to-face with the living Jesus. This is why Mary Magdalene supposes that she’s talking to a gardener. Because she thinks Jesus is dead.

She doesn’t recognize Him because her heart and mind are still in the old creation. She still only knows familiar order of sin and death and loss. Even the presence of the two angels in an empty tomb is no comfort on its own. Even a rhetorical question from the living Lord does not snap her out of it. All she imagines is a dead Jesus. All she sees is a gardener.

But then, everything changes.

She turned and said to Him in Aramaic, “Rabboni!” (which means Teacher). verse 16

At the sound of Jesus’ viva vox, His living voice calling her name, Mary is spoken into His new creation.

It’s all over the Bible.

Jesus calls Mary by name. And as He calls her by name, He ushers her into the new world He has made. But Jesus did not stop with Mary. Jesus has called you by name. You…

In Holy Baptism, Christ has called you by name. He has made you His own. He has washed you into His own death and resurrection.

That’s why Easter is not just for Jesus. Easter is for you, because Jesus is for you! You have a living Jesus, now this morning, and every day forever.

Because Jesus is risen indeed, Mary can even see Him to be the Gardener. From all my reading in Holy Week, this seems to have been missed by the scholars, But it has been at least partially understood by the artists.

From icons and statuary to paintings and woodcuts, Christian artists from antiquity through up to today have depicted Jesus as a Gardener. My favorite is the Flemish painter, Jans Wildens. He shows our Lord presenting Himself to Mary Magdalene just this way. As a Gardener.

In his rendering, Jesus is risen indeed, and His body bears those dazzling scars. But His pierced hand is also holding a shovel, and He’s wearing a hat to keep the sun off His head. In the background are various fruits of the earth: root vegetables, gourds, and so on. It looks like Jesus, refreshed from His three-day rest, is actually going to work! Jesus, the Gardener.

It’s not so hard to imagine. The Scriptures are replete with this sort of imagery, after all. Jesus, the Sower who sows the goodly seed abroad; Jesus the Good Shepherd, calling His sheep by name; Jesus the True Vine, nurturing the branches; Jesus, the promised Seed of Abraham… He has been cast into the earth, and this was necessary. For unless a grain of what falls into the earth and dies, it remains alone; but if it dies, it bears much fruit.

The Seed that was planted in the Virgin’s womb has burst forth from the virgin tomb. The Eden which we ruined has been replanted. It belongs to Jesus, the Gardener.

He will clear the stones from your tombs. He will pull you from the earth – full, healthy, whole, and glorious. Jesus, the Gardener, is preparing you for this, even now. He is pruning, clipping, and trimming away everything not fit for His Garden. Sometimes this hurts and leaves us weeping with Mary.

But Jesus the Gardener is also always nurturing, feeding, and strengthening. On the cross, the water and blood from His side nourished the earth. Now that water fills the Baptismal font. Now that blood fills the Chalice. Now you who have been named, planted, watered, fed, and nourished; now you go forth in joy. You are His, He has called you by name. You have seen the Lord, and He has said these things to you.

So, you can go home today and every day, rejoicing. You might even plant a garden.