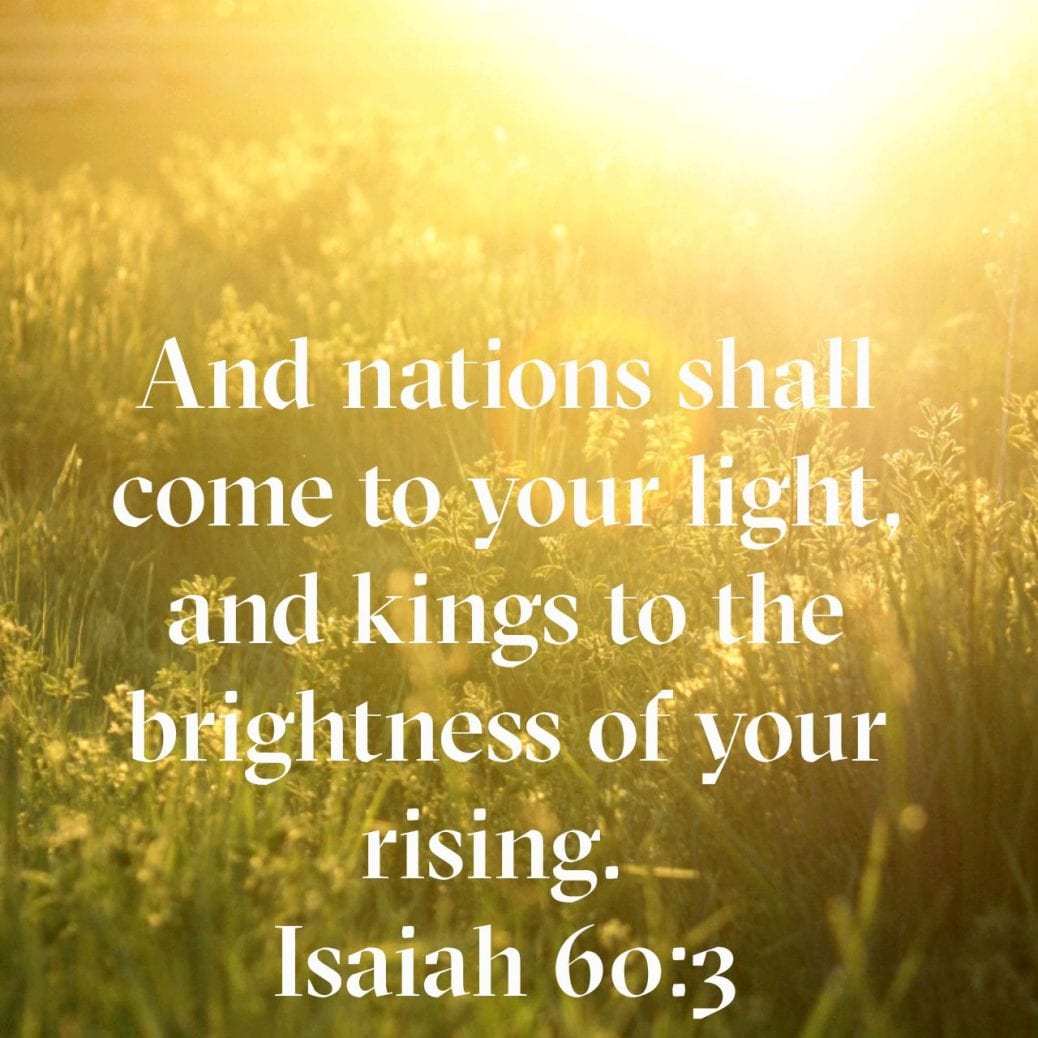 As we leave behind the darkest days of winter and the days grow longer, the readings for the feast of Epiphany are full of light. The light of Christ breaks forth on those living in the darkness of this sinful world. Like someone lost in a cave searching for a glimmer of light, or like people in a dark winter craving sunlight, like people suffering in a pandemic longing for relief, we see that Kings and nations are drawn to God’s light. The bright star that guides the wise men is not as bright as the light of Christ’s saving truth. Like them, we fall down and worship, for He has come to save us from everything – our sin, death, suffering, confusion, despair. By His sacrifice we are forgiven and set free, no longer afraid of God’s overwhelming glory, but attracted to the life and immortality He has brought to light through the gospel. (2 Timothy 1:10)

[God] says:
“It is too light a thing that you should be my servant
to raise up the tribes of Jacob
and to bring back the preserved of Israel;
I will make you as a light for the nations,
that my salvation may reach to the end of the earth.” Isaiah 49:6

The Old Testament lesson is from the book of Isaiah, chapter 60, verses 1-6:

Arise, shine, for your light has come,
and the glory of the Lord has risen upon you.
For behold, darkness shall cover the earth,
and thick darkness the peoples;
but the Lord will arise upon you,
and his glory will be seen upon you.
And nations shall come to your light,
and kings to the brightness of your rising.

Lift up your eyes all around, and see;
they all gather together, they come to you;
your sons shall come from afar,
and your daughters shall be carried on the hip.
Then you shall see and be radiant;
your heart shall thrill and exult,
because the abundance of the sea shall be turned to you,
the wealth of the nations shall come to you.
A multitude of camels shall cover you,
the young camels of Midian and Ephah;
all those from Sheba shall come.
They shall bring gold and frankincense,
and shall bring good news, the praises of the Lord.

The Epistle lesson is from Ephesians, chapter 3, verses 1-12:

For this reason I, Paul, a prisoner of Christ Jesus on behalf of you Gentiles — assuming that you have heard of the stewardship of God’s grace that was given to me for you, how the mystery was made known to me by revelation, as I have written briefly. When you read this, you can perceive my insight into the mystery of Christ, which was not made known to the sons of men in other generations as it has now been revealed to his holy apostles and prophets by the Spirit. This mystery is that the Gentiles are fellow heirs, members of the same body, and partakers of the promise in Christ Jesus through the gospel.

Of this gospel I was made a minister according to the gift of God’s grace, which was given me by the working of his power. To me, though I am the very least of all the saints, this grace was given, to preach to the Gentiles the unsearchable riches of Christ, and to bring to light for everyone what is the plan of the mystery hidden for ages in God, who created all things, so that through the church the manifold wisdom of God might now be made known to the rulers and authorities in the heavenly places. This was according to the eternal purpose that he has realized in Christ Jesus our Lord, in whom we have boldness and access with confidence through our faith in him.

The Gospel for the Epiphany of Our Lord is from Matthew, chapter 2, verses 1-12:

Now after Jesus was born in Bethlehem of Judea in the days of Herod the king, behold, wise men from the east came to Jerusalem, saying, “Where is he who has been born king of the Jews? For we saw his star when it rose and have come to worship him.” When Herod the king heard this, he was troubled, and all Jerusalem with him; and assembling all the chief priests and scribes of the people, he inquired of them where the Christ was to be born. They told him, “In Bethlehem of Judea, for so it is written by the prophet:

“‘And you, O Bethlehem, in the land of Judah,
are by no means least among the rulers of Judah;
for from you shall come a ruler
who will shepherd my people Israel.’”

Then Herod summoned the wise men secretly and ascertained from them what time the star had appeared. And he sent them to Bethlehem, saying, “Go and search diligently for the child, and when you have found him, bring me word, that I too may come and worship him.” After listening to the king, they went on their way. And behold, the star that they had seen when it rose went before them until it came to rest over the place where the child was. When they saw the star, they rejoiced exceedingly with great joy. And going into the house, they saw the child with Mary his mother, and they fell down and worshiped him. Then, opening their treasures, they offered him gifts, gold and frankincense and myrrh. And being warned in a dream not to return to Herod, they departed to their own country by another way. 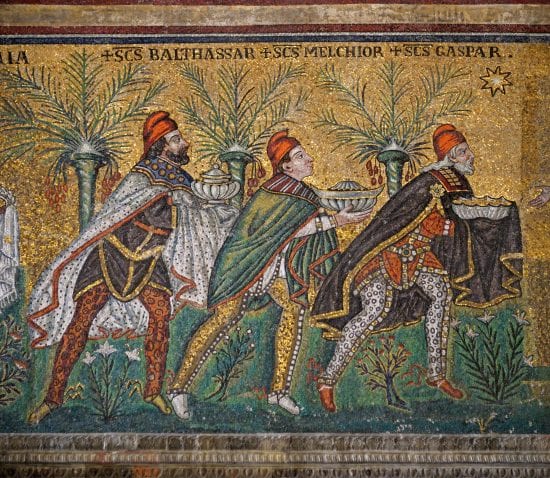 Three Wise Men from the East. Part of the mosaic on the left wall of the Basilica of Sant’Apollinare-Nuovo. Ravenna, Italy, from Wikimedia [CC BY-SA 3.0]