Do not worry. Do not grow weary. The Lord will provide. God in His Word asks us over and over to trust Him, but if we are honest with ourselves, we’re not terribly good at it. Most of us are pretty good at worrying. Jesus asks us, Which of you by being anxious can add a single hour to his span of life? And the truth is that stress shortens our life and steals our joy. God knows our weakness, He knows our needs better than we do, and He has promised to provide.

As God provided a widow with flour and oil to feed Elijah, as God provided a ram for Abraham’s burnt sacrifice, as God sent quail and manna every day for forty years in the desert to feed His people, as Jesus multiplied the fish and loaves to feed thousands and then provided Himself as the sacrifice for our sins, God promises to provide for us. God knows what each of us needs better than we do ourselves, and loves us with His jealous love. Let us ask Him to help us trust Him, to give us the strength we need not to grow weary doing good in this evil world. For He has also promised to hear our prayers, and to give us what is good.

O Lord, grant us faith like little children to hold out our hands to You, for You are our loving Abba, Father.

Then the word of the Lord came to him, “Arise, go to Zarephath, which belongs to Sidon, and dwell there. Behold, I have commanded a widow there to feed you.”

And she said, “As the Lord your God lives, I have nothing baked, only a handful of flour in a jar and a little oil in a jug. And now I am gathering a couple of sticks that I may go in and prepare it for myself and my son, that we may eat it and die.”

And Elijah said to her, “Do not fear; go and do as you have said. But first make me a little cake of it and bring it to me, and afterward make something for yourself and your son. For thus says the Lord, the God of Israel, ‘The jar of flour shall not be spent, and the jug of oil shall not be empty, until the day that the Lord sends rain upon the earth.’” And she went and did as Elijah said. And she and he and her household ate for many days. The jar of flour was not spent, neither did the jug of oil become empty, according to the word of the Lord that he spoke by Elijah.

The Epistle lesson is from Galatians, chapter 5, verse 25 to chapter 6, verse 10:

[6] Brothers, if anyone is caught in any transgression, you who are spiritual should restore him in a spirit of gentleness. Keep watch on yourself, lest you too be tempted. Bear one another’s burdens, and so fulfill the law of Christ. For if anyone thinks he is something, when he is nothing, he deceives himself. But let each one test his own work, and then his reason to boast will be in himself alone and not in his neighbor. For each will have to bear his own load.

Let the one who is taught the word share all good things with the one who teaches. Do not be deceived: God is not mocked, for whatever one sows, that will he also reap. For the one who sows to his own flesh will from the flesh reap corruption, but the one who sows to the Spirit will from the Spirit reap eternal life. And let us not grow weary of doing good, for in due season we will reap, if we do not give up. So then, as we have opportunity, let us do good to everyone, and especially to those who are of the household of faith.

The Gospel for the Fifteenth Sunday after Trinity is from Matthew, chapter 6, verses 24-34:

“No one can serve two masters, for either he will hate the one and love the other, or he will be devoted to the one and despise the other. You cannot serve God and money.

“Therefore I tell you, do not be anxious about your life, what you will eat or what you will drink, nor about your body, what you will put on. Is not life more than food, and the body more than clothing? Look at the birds of the air: they neither sow nor reap nor gather into barns, and yet your heavenly Father feeds them. Are you not of more value than they? And which of you by being anxious can add a single hour to his span of life? And why are you anxious about clothing? Consider the lilies of the field, how they grow: they neither toil nor spin, yet I tell you, even Solomon in all his glory was not arrayed like one of these. But if God so clothes the grass of the field, which today is alive and tomorrow is thrown into the oven, will he not much more clothe you, O you of little faith? Therefore do not be anxious, saying, ‘What shall we eat?’ or ‘What shall we drink?’ or ‘What shall we wear?’ For the Gentiles seek after all these things, and your heavenly Father knows that you need them all. But seek first the kingdom of God and his righteousness, and all these things will be added to you.

“Therefore do not be anxious about tomorrow, for tomorrow will be anxious for itself. Sufficient for the day is its own trouble. 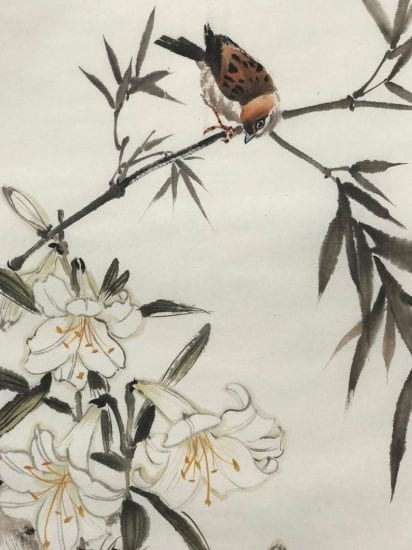 Sparrow Perched on the Lily Flower, by Nikole Lowe