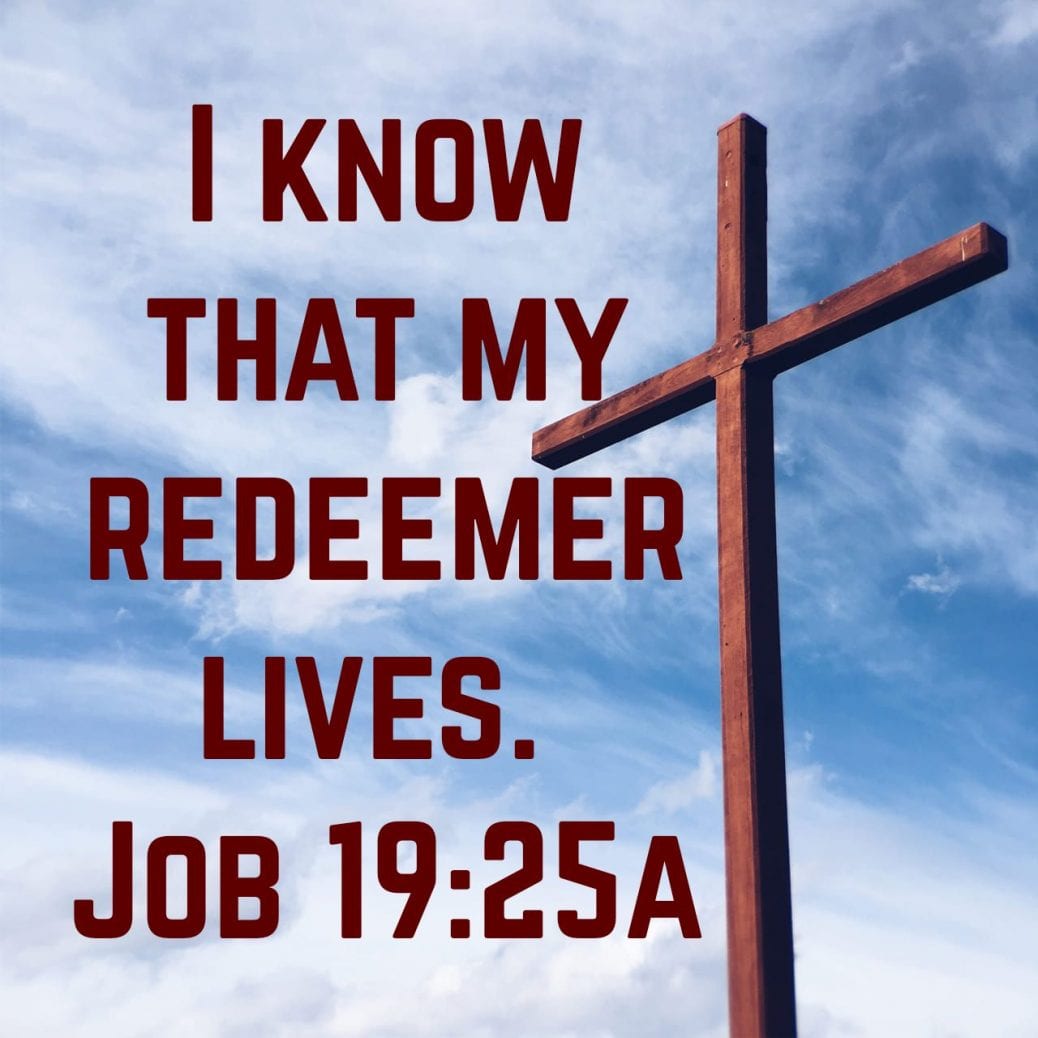 Readings for Easter Sunday on Monday of Holy Week. Doesn’t that seem a little premature – a little like breaking our fast early? Perhaps like the rejoicing of the disciples on Palm Sunday, when they thought finally Jesus would be crowned king as they had hoped, despite all His confusing talk about suffering and rising on the third day.

Yet we have to cut them a little slack – sometimes it’s easier to see things from far away. We have never experienced Holy Week like they did – with the stench and bustle of people crowded too close together for the Passover, the fear of the Roman soldiers patrolling, the darkness and chaos of the arrest in the night, the heart rending sight, smell, sound of the person you’ve put all your hopes on suffering and dying, the bleak emptiness of Saturday’s grief mixed with fear for their own safety.

After all, we know where this is going. Even while we meditate on Jesus’ sufferings, we know that our Redeemer lives. Only by God’s grace could Job have known and trusted in Him thousands of years before He walked the earth. Job saw from very far, just a shadow of the promises to come, and he believed in God’s salvation. We see so much more easily with hindsight, and yet for thousands of years before Jesus came, there were those who, like Abraham, believed God and it was credited to him as righteousness. The disciples had all the writings of the prophets, and the repeated promises of Jesus that He would die and rise, and yet they just couldn’t believe that God’s plan could be so much greater than their plans.

If the disciples could have believed God when He told them His plan, however outlandish it might seem, they would have had the same comfort in their fears and sorrows that we have this week. He wasn’t going to bother with their small plans. To them it seemed pretty big and important to free Jerusalem from Roman rule! Rome was the biggest despot they could imagine, but Jesus had a bigger tyrant in His sights.

They couldn’t imagine His plan. To defeat Satan, to destroy sin and death, was so big they couldn’t even see it. Jesus was fighting in the heavenly realms and the disciples were stuck in the dirt and dust of the earth. And His strategy, to destroy death by dying, was so crazy that even wily Satan fell for it. He didn’t need to be crowned the king of the Jews, He already was the KING above all Kings.

So here we are, stuck in the dirt and dust and germs of earth. Even as we grieve for our sins that made His Sacrifice necessary for our salvation, and we grieve for the human suffering all around us, we do not grieve as those who have no hope. Though we walk through the valley of the shadow of death, we shall fear no evil. We must wait for Easter day, as we wait also for the end Day when He will again stand upon the earth in His power and glory. In the meantime, we trust His promises and His plans, for He knows His plans for us, to prosper us and not to harm, to give us hope and a future. And when our time of exile is over, we will once again see with our own eyes the words above the door: I was glad when they said unto me, let us go into the house of the Lord.

“Oh that my words were written!
Oh that they were inscribed in a book!
Oh that with an iron pen and lead
they were engraved in the rock forever!
For I know that my Redeemer lives,
and at the last he will stand upon the earth.
And after my skin has been thus destroyed,
yet in my flesh I shall see God,
whom I shall see for myself,
and my eyes shall behold, and not another.
My heart faints within me!

The sting of death is sin, and the power of sin is the law. But thanks be to God, who gives us the victory through our Lord Jesus Christ.

The Gospel for Easter Sunday is from John, chapter 20, verses 1-18:

Now on the first day of the week Mary Magdalene came to the tomb early, while it was still dark, and saw that the stone had been taken away from the tomb. So she ran and went to Simon Peter and the other disciple, the one whom Jesus loved, and said to them, “They have taken the Lord out of the tomb, and we do not know where they have laid him.” So Peter went out with the other disciple, and they were going toward the tomb. Both of them were running together, but the other disciple outran Peter and reached the tomb first. And stooping to look in, he saw the linen cloths lying there, but he did not go in. Then Simon Peter came, following him, and went into the tomb. He saw the linen cloths lying there, and the face cloth, which had been on Jesus’ head, not lying with the linen cloths but folded up in a place by itself. Then the other disciple, who had reached the tomb first, also went in, and he saw and believed; for as yet they did not understand the Scripture, that he must rise from the dead. Then the disciples went back to their homes.

But Mary stood weeping outside the tomb, and as she wept she stooped to look into the tomb. And she saw two angels in white, sitting where the body of Jesus had lain, one at the head and one at the feet. They said to her, “Woman, why are you weeping?” She said to them, “They have taken away my Lord, and I do not know where they have laid him.” Having said this, she turned around and saw Jesus standing, but she did not know that it was Jesus. Jesus said to her, “Woman, why are you weeping? Whom are you seeking?” Supposing him to be the gardener, she said to him, “Sir, if you have carried him away, tell me where you have laid him, and I will take him away.” Jesus said to her, “Mary.” She turned and said to him in Aramaic, “Rabboni!” (which means Teacher). Jesus said to her, “Do not cling to me, for I have not yet ascended to the Father; but go to my brothers and say to them, ‘I am ascending to my Father and your Father, to my God and your God.’” Mary Magdalene went and announced to the disciples, “I have seen the Lord”—and that he had said these things to her.