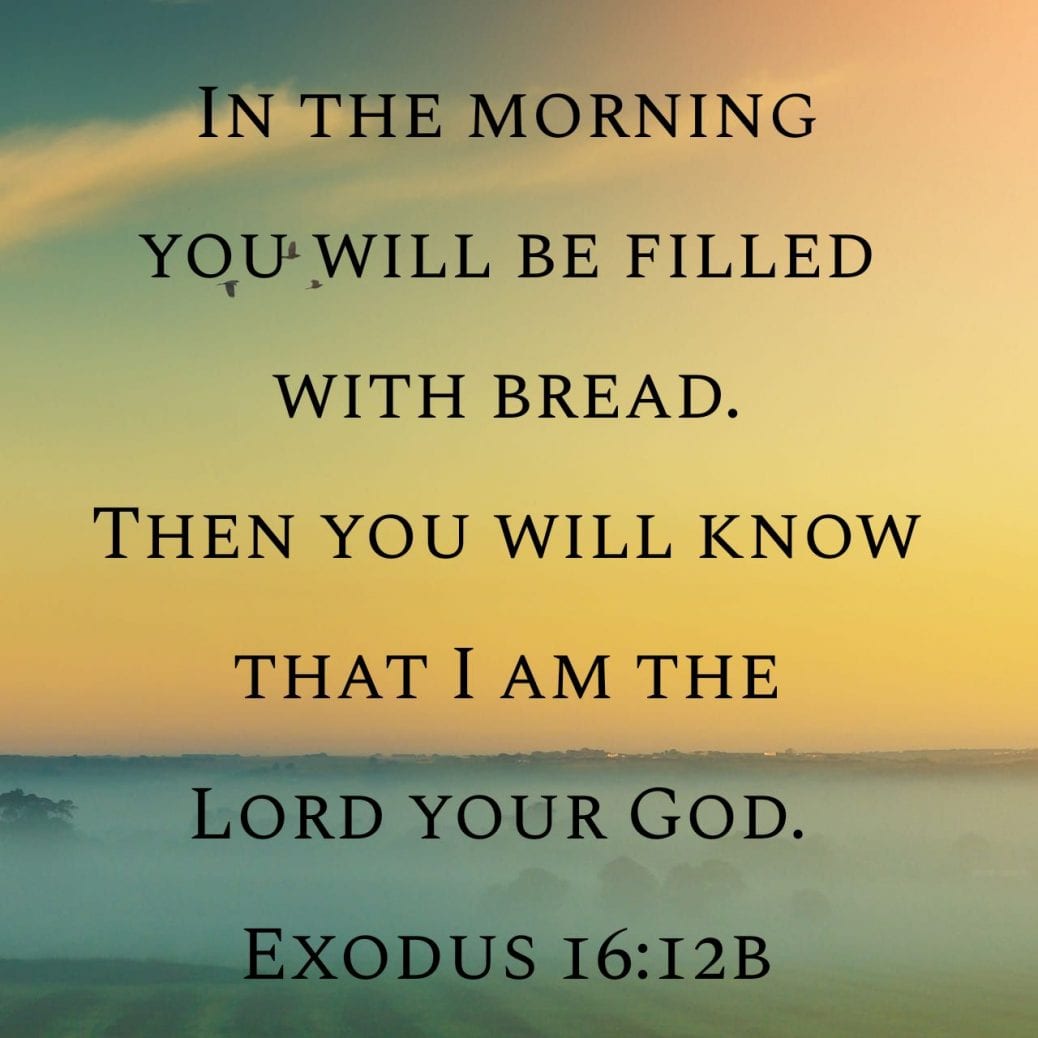 Give us this day our daily bread. Next Sunday’s readings are all about bread – and the One who gives it. The Israelites grumble and complain for their bread – and yet God in His mercy still fills them with bread every morning, and gives them meat every evening. He feeds an entire nation in the middle of the desert for forty years, that they might know that I am the Lord your God. When Jesus, the bread of life, comes down among His people, He fills the five thousand with bread and fish with plenty left over. We are children of the promise, and we can trust the sure promises of God:

As Jesus gave thanks before distributing the bread and fish, let us give thanks this week for our daily bread, and for the Bread of Life Who came down from heaven to give us eternal life, just as He promised.

Give us this day our daily bread.

What does this mean? God certainly gives daily bread to everyone without our prayers, even to all evil people, but we pray in this petition that God would lead us to realize this and to receive our daily bread with thanksgiving.

What is meant by daily bread? Daily bread includes everything that has to do with the support and needs of the body, such as food, drink, clothing, shoes, house, home, land, animals, money, goods, a devout husband or wife, devout children, devout workers, devout and faithful rulers, good government, good weather, peace, health, self-control, good reputation, good friends, faithful neighbors, and the like.

The Old Testament lesson is from the book of Exodus, chapter 16, verses 2-21:

In the desert the whole community grumbled against Moses and Aaron. The Israelites said to them, “If only we had died by the Lord’s hand in Egypt! There we sat around pots of meat and ate all the food we wanted, but you have brought us out into this desert to starve this entire assembly to death.”

Then the Lord said to Moses, “I will rain down bread from heaven for you. The people are to go out each day and gather enough for that day. In this way I will test them and see whether they will follow my instructions. On the sixth day they are to prepare what they bring in, and that is to be twice as much as they gather on the other days.”

Then Moses told Aaron, “Say to the entire Israelite community, ‘Come before the Lord, for he has heard your grumbling.’”

While Aaron was speaking to the whole Israelite community, they looked toward the desert, and there was the glory of the Lord appearing in the cloud.

The Lord said to Moses, “I have heard the grumbling of the Israelites. Tell them, ‘At twilight you will eat meat, and in the morning you will be filled with bread. Then you will know that I am the Lord your God.’”

That evening quail came and covered the camp, and in the morning there was a layer of dew around the camp. When the dew was gone, thin flakes like frost on the ground appeared on the desert floor. When the Israelites saw it, they said to each other, “What is it?” For they did not know what it was.

Moses said to them, “It is the bread the Lord has given you to eat. This is what the Lord has commanded: ‘Everyone is to gather as much as they need. Take an omer for each person you have in your tent.’”

Then Moses said to them, “No one is to keep any of it until morning.”

However, some of them paid no attention to Moses; they kept part of it until morning, but it was full of maggots and began to smell. So Moses was angry with them.

Each morning everyone gathered as much as they needed, and when the sun grew hot, it melted away.

The Epistle lesson is from Galatians, chapter 4, verses 21-31:

These things are being taken figuratively: The women represent two covenants. One covenant is from Mount Sinai and bears children who are to be slaves: This is Hagar. Now Hagar stands for Mount Sinai in Arabia and corresponds to the present city of Jerusalem, because she is in slavery with her children. But the Jerusalem that is above is free, and she is our mother. For it is written:

“Be glad, barren woman,
you who never bore a child;
shout for joy and cry aloud,
you who were never in labor;
because more are the children of the desolate woman
than of her who has a husband.”

The Gospel for the fourth Sunday in Lent is from John, chapter 6, verses 1-15:

Some time after this, Jesus crossed to the far shore of the Sea of Galilee (that is, the Sea of Tiberias), and a great crowd of people followed him because they saw the signs he had performed by healing the sick. Then Jesus went up on a mountainside and sat down with his disciples. The Jewish Passover Festival was near.

When Jesus looked up and saw a great crowd coming toward him, he said to Philip, “Where shall we buy bread for these people to eat?” He asked this only to test him, for he already had in mind what he was going to do.

Philip answered him, “It would take more than half a year’s wages to buy enough bread for each one to have a bite!”

Another of his disciples, Andrew, Simon Peter’s brother, spoke up, “Here is a boy with five small barley loaves and two small fish, but how far will they go among so many?”

Jesus said, “Have the people sit down.” There was plenty of grass in that place, and they sat down (about five thousand men were there). Jesus then took the loaves, gave thanks, and distributed to those who were seated as much as they wanted. He did the same with the fish.

When they had all had enough to eat, he said to his disciples, “Gather the pieces that are left over. Let nothing be wasted.” So they gathered them and filled twelve baskets with the pieces of the five barley loaves left over by those who had eaten.

After the people saw the sign Jesus performed, they began to say, “Surely this is the Prophet who is to come into the world.” Jesus, knowing that they intended to come and make him king by force, withdrew again to a mountain by himself. 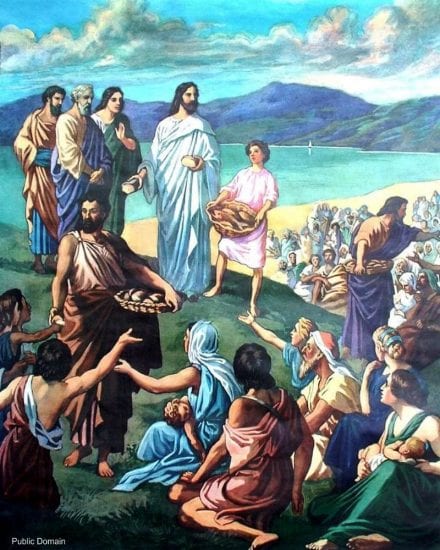