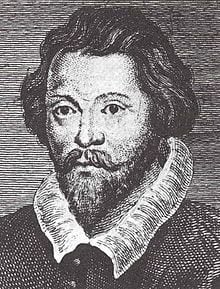 This Sunday the FLC choir sings two Eucharistic motets written by Catholic composers who worked during the Reformation. The fact that the composers were members of the Roman communion does not preclude their use among Lutherans, for the texts are indeed thoroughly orthodox. Both settings are typical Renaissance motets, in which each portion of the text receives its own distinct little melody, which is tossed about between the voices.

William Byrd (1540–1624) lived in England during the Tudor period, when being a Catholic was suspicious at best and seditious at worst. His music, however, was so utterly brilliant that (along with his mentor Thomas Tallis) he was granted a monopoly to print music paper by the Queen. Byrd’s setting of O sacrum convivium, a text by St. Thomas Aquinas, beautifully expresses the reality of what takes place in the Sacrament:

O sacred banquet, in which Christ is received, the memory of His passion is recalled, the mind is filled with grace, and a pledge of future glory to us is given. Alleluia.

In contrast to the dangerous situation in which Byrd worked, Giovanni Pierluigi da Palestrina (c. 1525–1594) worked in relative safety: he wrote music for the papal chapel in Rome. The text Ego sum panis vivus is taken from the words of Jesus in John 6:48–51:

I am the bread of life. Your fathers ate the manna in the wilderness, and they died. This is the bread that comes down from heaven… If anyone eats of this bread, he will live forever. (ESV)

In John 6, Jesus is challenged by the 5000 whom he had miraculously fed just the prior day on the mountain: they ask for a sign, because “our fathers ate manna in the wilderness,” which was “bread from heaven”—as if the miraculous food Christ had given them was nothing special! Jesus points out “yes, they did eat that manna, and it did come from heaven, but they also died. If you eat of Me, you will never die.” Palestrina’s music demonstrates this, with the words et mortui sunt (“and they died”) approached inevitably, but almost without one noticing that these words are sung lower and more slowly than those that came before. Indeed, death sneaks up on us all, and it is unavoidable no matter how healthily we might eat. We only notice that these words are treated this way when the text continues with the contrasting thought: hic est panis de caelo descendens (“this is the bread that comes down from heaven”), leaping optimistically to the sky. Indeed, Jesus is the living bread from heaven, and he who eats of Him will live forever.

Motets like these by Byrd and Palestrina testify that the Gospel was present in the Roman church, even while its leadership worked to obscure it with indulgences, the treasury of merits, and a ban on the vernacular. Indeed, even when it is being actively suppressed, the Gospel “goes out through all the earth, and [its] message to the uttermost bounds of the world” (Ps. 19:4).